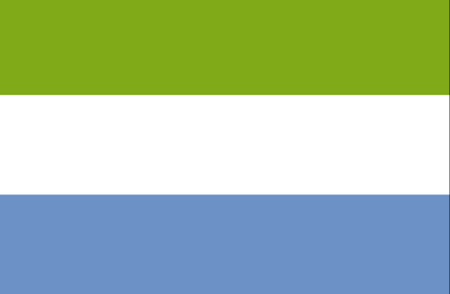 The Republic of Sierra Leone is located on the northwest coast of Africa, sharing borders with Guinea and Liberia. Successive cultures have occupied the area since around 500 BCE; Europeans began arriving in the late 15th century. The Portuguese, followed by the French and Dutch, established trading posts in Freetown Harbor, which became a major shipping point for enslaved Africans from the interior. In the late 17th and early 18th centuries the British, in the process of at last putting an end to the transatlantic slave trade, settled a couple thousand formerly enslaved people of African ancestry from the Americas, with some difficulty, in what would become Sierra Leone. The British administered the region as part of their Gold Coast territory until the country gained its independence in 1961. What began as a democracy within a few years degenerated into nearly a quarter century of dictatorship, which was followed by a decade-long civil war. In the early 21st century a measure of stability was achieved, though the outbreak of the deadly ebola virus dealt a blow to the entire region in 2014.

In the midst of all the turmoil, golf has never had a chance to take root. The English built a course in the capital of Freetown in the early 1900s, and the Freetown Golf Club moved to its present location a few decades later. The club renounced its racist admission policy following independence, and it is now the only one of half a dozen courses that were in operation before the civil war that is still open for business.