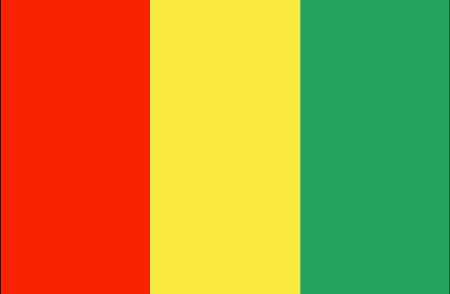 Guinea, which was known as French Guinea until gaining its independence in 1958, is on Africa's west coast, bordering Guinea Bissau, Senegal, Mali, Ivory Coast, Liberia, Sierra Leone and the bay with which it shares its name. The capital and main city is Conakry on the coast, home to about one eighth of the nation's 12 million citizens. French remains the language of government and business, though some two dozen local tongues are spoken in various places around Guinea. The country is rich in natural resources, including diamonds, gold and bauxite, though that wealth has repeatedly been squandered by questionable dealings between mining interests and the government. Guinea is also rich in terms of its landscapes and wilderness; from the mountainous Fouta Djallon central region to the expansive Sahelian plains in the northeast to lush jungles in the southeast and the long stretch of coastline, there is an enormous range of environments and scenery here.

Being an African country, it almost goes without saying that soccer is Guinea's number one sport, and hope springs eternal that the national team, called the National Elephant, will one day make the cut for the World Cup Finals. Golf, however, does not seem to have made its way to Guinea, at least not yet, despite the existence of the suggestively named Hotel le Golf in Conakry.