Located in southeastern Africa, the nation of Zimbabwe borders Botswana, Zambia, Mozambique and South Africa. Its 13 million people inhabit a territory roughly as big as Germany. The region was dominated by the British from the mid-nineteenth through the mid-twentieth centuries, when it was known as Rhodesia. The white minority government attempted to secede from Britain in the 1960s, but was eventually forced to yield to discontent among the majority population in 1980, when the country was renamed Zimbabwe and its first black head of state, Robert Mugabe, was elected to the presidency. While Mugabe did much to break apart the old power structure that had kept the most Zimbabweans from sharing in their nation's riches, he proved to be an at times brutal dictator whose corrupt regime squandered vast sums on its own enrichment over the decades and shows no sign of releasing its grip.

It is therefore all the more remarkable that Zimbabwe has managed to produce so many golfers able to compete on the international stage. Standouts include Nick Price, one-time world's #1 and winner of the PGA Championship in 1992 and 1994 and The Open in 1994, with an impressive 50 victories as a pro, and Mark McNulty, who numbered among the ten best players in the world during the 1990s, with 22 European Tour victories. Today the leading Zimbabwean golfer is Brendan De Jonge, who played on the International Team at the Presidents Cup in 2013.

This talent has been nurtured on the 30 or so courses that have opened around the country. The standout is the Royal Harare Golf Club, a classic British facility in the capital that opened in 1898 and underwent major renovations overseen by Fred Hawtree in the 1950s and by native son Nick Price in 1996. Excellent golf can be had as well at Chapman Golf Course and Leopard Rock, also in the vicinity of the capital; the latter club features one of the top layouts on the continent, the work of Peter Matkovich in 1946.

The All Square ranking of the best golf courses in Zimbabwe 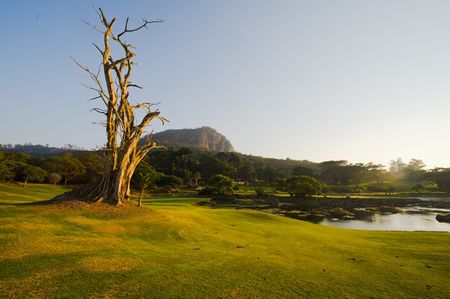 Zimbabwe
Your rating
No users played here
Already played this course?
See all 10
See all 10
Explore 36 golf courses in Zimbabwe

Zimbabwe
Your rating
No users played here
Already played this course?
See all 36
See all 36