Golf Courses in the Seychelles

Located in the Indian Ocean some 900 miles off the eastern coast of Africa, the 115 islands that comprise the Seychelles archipelago remained largely uninhabited until Arab, and later Portuguese, French and British traders and military adventurers began trying to control them in the 1600s as important ports-of-call on Indian Ocean trade routes. The British eventually gained the upper hand and ruled the islands until 1976, when independence was granted, making the Seychelles the least populous nominally African state. Today, fewer than 100,000 people live here, more than a quarter of them in the capital city of Victoria on the main island of Mahé.

The islands have emerged as a major tourist destination owing to their gleaming beaches, reefs that make for great scuba and snorkeling and native wildlife that includes the gigantic Aldabra tortoise. The attractions also include golf, with two lovely courses available. The 9-hole layout at Seychelle Golf Club in the capital combines natural beauty with a good test of skill. And in 2000 Rodney Wright and Marc-Antoine Farry created the stunning Lémuria Course, which features distinctive terraced greens that plays through the rainforest and down to the beach and offers superb vistas of Kerlan Cove and Grand Kerlan Cove.

Explore 2 golf courses in the Seychelles

Discover golf courses in the Seychelles ordered by rating 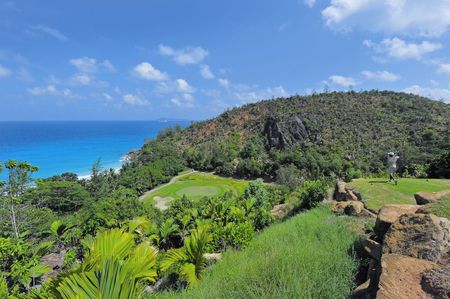